In the shipyard Marin owned by the shipbuilder Ante Fržop, a boat type leut named Kvarneriol, 8 meters long and 3 meters wide, was launched. She has a 12-meter-long lantina (yard) and a 57 HP engine, registered for the transport of 12 people, equipped with a 150l oil tank and a 150l water tank, a toilet with a sink and a cooking area. Kvarneriol is made for several days of sailing and a longer stay at sea. 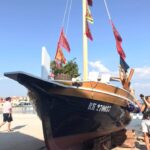 The design is like one of our traditional boats – turned into a yacht, but still traditional because she can be paddled on two oars if there’s a need to. One oar on the bow, another oar on the stern. And you can also sail with her, as has always been sailed, traditionally, with a Lateen sail – said the shipbuilder Fržop about the ship.

Frames are made of a mixture of oak and elm, the deck is larch. The cabin is made of mahogany. The sohe (traditional oarlocks) are made of black elm. Both black and white elm are used in shipbuilding. This black one has a good vein that was interesting to the shipbuilder. For this reason, he used varnish instead of traditional paint. Some things suffer from varnish. This boat is more for sports, he says.

These parts will not be used much so the soha (oarlock) can be used for decoration. The desire of the boat owner was to make some kind of a fence around the mrtva banda (“false” side bulwark), to be safer, to have a secure space while walking on the side. In order not to disturb the traditional appearance of the ship, the shipbuilder suggested one oar to be placed on the right side, and the other one stays on the hrokate (oar davits, oar carriers). He kind of repeated his design from his previous work, leut Orlić. Small modifications have been made, a small part has been added to the traditional oar locks and now they also serve as oar carriers. On the right, hrokate (oar davits, oar carriers) have never been placed traditionally. The oars put in this way work as a fence and are also nice to see, they are functional and fit perfectly to the boat.

When we asked him what technique building the ship he was using, he told us: “The ship is made respecting the rules of the traditional shipbuilding craft. It is known what it means when working by the craft, it means that the highest quality wood is placed, the wood that best suits the position within the ship’s structure. To work by the craft means to make the right joints of different pieces of wood, the more complex ones instead of the simple ones. It means working with quality, respecting the knowledge and the way of working we have inherited from previous generations of shipbuilders, while eliminating mistakes in performance and striving for perfection.”

The owner of the ship, Đanfranko Načinović from Plomin, has a personal story about why he wanted this particular ship. From his early age he was closely tied to the sea. After several ships he owned and after several decades of sailing, he decided to make his own leut. The crucial moment happened four years ago when he attended the international conference “Maritime Heritage in Local Communities – Models of Sustainability” held in Betina in 2016. As part of the conference, a regatta on Lateen sail was held which he also joined. It was then that he first saw leut Gušte, owned by a local Tonko Skračić from Betina, also the work of the boat builder Fržop from 2008. Four years and two months passed from the idea to realization. Meanwhile, Đanfranko has been virtually following the voyages of Gušte and Orlić for months, through the web pages of Burtiž, our Museum and other Internet and Facebook pages oriented towards the preservation of maritime heritage. When he really decided he wanted a new one, the wooden leut, he got a lot of support from his family. According to Đanfranko, the new leut was a big investment, but this dream coming true is priceless. This was the life wish of a ten-year-old.

The agreement between the shipbuilder and the boat owner was that a new Gušte would be built, with a few changes. The hull remained the same. Shipbuilder Fržop says that small deviations can happen to him on the hull, but only up to an centimeter or two, and he does not consider that significant. He works by his own templates. There are sometimes corrections on the boat, on the bow or stern, depending on the power of the engine, depending on whether the boat will carry the cargo or not. Depending on this some frames can be strengthened, depending on where the heavier load would be. In this case, the owner gave the shipbuilder the freedom to do as he thought best. And he didn’t miss. The biggest difference between Gušte and Kvarneriol is in the stern. Kvarneriol has more space at the stern, part of the deck from the middle towards the stern was rearranged and benches were seated, as on modern sailboats. The building design and other elements is still traditional.

Kvarneriol will sail from Betina to Rijeka where she will be berthed. We hope that she will be in some nice position where she’ll be seen, noticed, where people will be able to admire her. The trip home will not be for leisure only but a chance to get to know the boat. It is still necessary to take care of the berth, lantina (yard), sail, to prepare her for winter hibernation so that in the spring the family can truly enjoy the boat, sail and get to know her. The desire of the boat owner is to stop professional navigation and to combine work with pleasure of the new boat. He hopes that in the future he will be able to sail one-day family trips in her for the traditional sailing lovers. He definitely plans to participate in regattas of traditional wooden boats in Kvarner, but also coming to Betina whenever possible. Đanfranco says that once you meet a shipbuilder you trust, it is difficult to let someone else put their hand on the ship besides him. He goes on saying: “A wooden boat is an investment, an obligation and a pleasure – all in one. You need to love that to accept those commitments. Like children. Children are a big commitment, but you love them deeply. The ship is a family member, too. And here in Betina the ship was a member of the family. Without a ship people would not be what they are. It was always set aside for both the ship and the child. ” Đanfranco once told us that his friends told him that he could buy a Porche instead of a ship like this, and we tell him that he has a Porche among the ships.

A huge congratulations to both the builder and the owner!